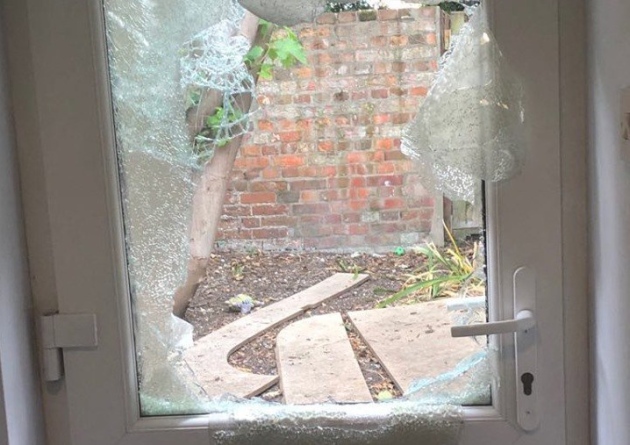 A shopkeeper has vowed she "will not be beaten" after thieves trashed her shop and stole £8,000 of vintage clothing.

Andrea Martins said clothes were tugged from hangers in the raid which saw thieves smash their way in through the back door.

But on Saturday (July 13), while she and husband Andrew were away on holiday, she was handed the bombshell news the shop had been targeted.

"I just wanted to come home," she said.

Boko's in Gorleston high street was targeted by thieves while the owner was away on holiday. It is open as usual and Andrea Martins is vowing she wont be beaten Picture: Andrea Martins

"They broke in through the back way and stole loads of stuff.

"They slung things about upstairs, probably looking for money, emptying the kitchen cupboards.

She said her daughter, Courtney Wright, discovered the burglary when she opened up, alerting police who sent a forensic team to comb for evidence.

Andrea Martins with her husband Andrew before the break-in at her shop Boko's in Gorleston high street Picture: Andrea Martins

There was broken glass where raiders had smashed their way in and clothes and rails all over the floor.

Rose Dearlove has opened Slayyy Vintage shop in Norwich Market and she is only 18 years old.

Track suits, T-shirts and bags were among the haul, with bags of items neatly folded, but not yet priced up, also taken,

"I am absolutely gutted that someone can do that," she added.

"People say 'that's how people are now', but I'm not going to let them beat me.

"I came in yesterday and swept the glass up and got straight again.

"I cannot not trade - I still have the rent to pay."

Mrs Martins, who lives in Gorleston and has previously run a tanning shop, said all the items had been hand-picked from a supplier in Birmingham.

She said the thieves were likely to try and sell the clothes on, but that many of the pieces were distinctive for their rarity.

A spokesman for Norfolk Police confirmed a large amount of stock had been taken during the break-in which happened between 5pm on Friday July 12 and 8am the next day.

The shop is open as usual from today, Thursday July 18.

In April Junx in the high street was targeted by smash-and-grab thieves who got away with £1,000 of Adidas clothing.

Back to News
Use left/right arrows to navigate the slideshow or swipe left/right if using a mobile device
Product has been added to your wishlist.
You can view your wishlist by creating or login account.
Please create account through ##customer_email## email
Login Register